Web development is no more a miracle especially when you have an access to enormous types of software technologies and frameworks.

These trending technologies, tools, and frameworks have proved to be helpful and savvy.

All you need to do is choose the appropriate types of tools to digitalize a product. One of those famous protocols is angular and its versions. In this blog, we will elucidate the difference between Angular and AngularJS.

For web application development, Angular is considered a real wonder. It is an open-source JS framework written in typescript language. Furthermore, it uses HTML syntax to define the program’s components. Single-page web applications are undoubtedly built using this framework.

Additionally, Google allows developers to work within the standard structure of Angular and maintain it and if you must know, as per the latest stats, Angular is expanding to a great extent.

How many versions of Angular are there? Before we proceed to the components of Angular and its versions, let’s shed some light on different types of Angular:

Components of Angular and AngularJs

Before you jump to the difference between Angular and AngularJS, it’s imperative to know about the components utilized in both frameworks.

Angular is a component-based typescript language that uses building blocks. Its components play an important role in designing user interfaces as UI’s each portion is defined as a component.

In Angular JS, directives are used instead that allow their users to reuse the codes. Besides that, it uses scopes and controllers. Component Directives in Angular JS are used to create user interfaces.

Difference Between AngularJS and Angular versions

Based on architecture, expression syntax, language, routing, performance and speed, and mobile support, we will compare all Angular latest versions. So, let’s get started!

Angular: It uses components that are directives with templates and there’re two types of directives:

Attributive directives: It changes the elements display and how the DOM behaves.

Angular JS: AngularJS architecture is based on MVC (model-view-controller) framework. As you must know, MVC works as a central component that is responsible for managing rules, logic, and data.

MVC functionality: The view layer transmits an output based on the information in the Model layer. Besides that, the Controller receives input, transforms it into commands, and sends them to the View and Model layers.

Is there a difference between Angular and AngularJS? Of course, there is. Check it out in terms of Expression Syntax.

Angular: Angular uses [] for property binding and () for event binding.

AngularJS: To deploy the right property/image to the AngularJS, remember to utilize the ng directive.

Angular: We know it is built on Microsoft’s typescript language (a superset of Javascript). Interestingly, it has some unavoidable advantages attached like the benefits of ES6 and type declarations.

AngularJS: This version is written in Javascript. 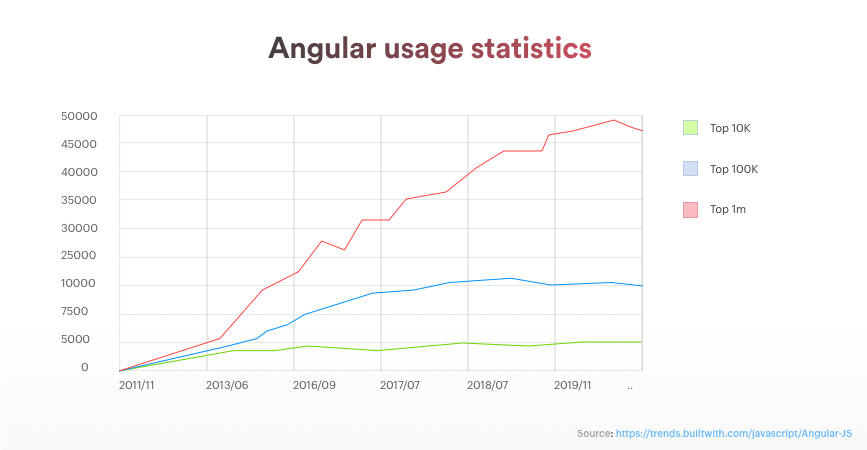 Are you curious to know what is the one main difference between angularJS and angular? Yes? Well, Angular employs @RouteConfig{(…)} in its code sets whereas $routeprovider.when() is used in AngularJS codes.

What can astonish you is AngularJS doesn’t build with mobile support in mind. But, all other Angular versions provide codesets catering to mobile support and maintenance.

What is the difference between different angular versions when it comes to analyzing speed or performance? Find out below!

Angular: Once the version is updated, it has improved the performance and speed of the whole software or product.

AngularJS: The time and efforts are brought down when two-way binding feature is deployed in the software development lifecycle.

One notable difference between Angular and AngularJS versions is:

AngularJS: This JS framework is dependent on third-party tools like WebStorm and IDE (integrated development environment).

Finally, we have talked about the noteworthy difference between Angular and AngularJS. Hope the buzz is cleared now and you have gotten enough know-how about these scripting languages and their differences.

Find the Best Solutions to all the Remote Learning Challenges

Remote Learning Challenges can be very overwhelming for both students and educators. New York Times conducted research focused on the challenges of remote learning for students which revealed there was a significant majority of students turning up for classes. Many…

As Newton once said ‘every action has an equal reaction.’ The reactions of AI are making headlines, and little did you know that it’s causing some serious threat to your privacy and data security. Believe it or not, this has…

How important is Salesforce for your business in 2021?

Salesforce is undoubtedly one of the top CRM (Customer Relationship Management) tools for it’s limitless integration across, and that’s what always keeps it in focus. With an aim to keep things aligned to enhance user experience, this cloud-based CRM tool…